Survival of the Fittest


The hive of the Vrill bears the scars of a terrifying cataclysm.  Only a handful remain alive, hatched after the holocaust of the mysterious Winterlack.  The Vrill seek a new Authority.  They find the Doctor, a two-legged creature who can lead them to survival.  He must solve the mystery of the Carrion beast that haunts the lower chambers.  He must face the Winterlack that still stalk the mountains.  And he must find a path that does not lead to extinction... 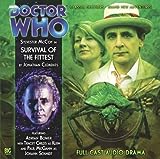