The Greatest Show in the Galaxy

The Doctor is juggling and Ace is looking for her rucksack when an advertising beacon materialises in the TARDIS control room, promoting the Psychic Circus on the planet Segonax. The Doctor decides to enter the Circuss talent contest.

On Segonax, Bellboy (Christopher Guard) and Flowerchild (Dee Sadler) are running across an open area of ground. They are being tracked by kites controlled by the Chief Clown (Ian Reddington) from a hearse. Bellboy draws the kites attention away as Flowerchild finds an abandoned bus and, entering it, locates a hidden box. Before she can open the box, however, she is attacked and killed by a robot bus conductor (Dean Hollingsworth). Bellboy, meanwhile, is captured by the Chief Clown and returned to the Circus.

The Doctor and Ace arrive on Segonax and obtain directions to the Circus from a local stallslady (Peggy Mount). The Doctor tries to hitch a lift on a bike owned by Nord the Vandal (Daniel Peacock), but Nord refuses and heads off to the circus on his own. The two travellers have no choice but to follow on foot. On the way they meet up with the intergalactic explorer Captain Cook (T P McKenna) and his companion, a young woman called Mags (Jessica Martin). Cook is taking tea while Mags investigates a giant robot mostly buried in the sand. Suddenly the robot comes to life and grabs Mags. Ace deactivates it by hitting it over the head with a shovel.

Moving on, the Doctor, Ace, Cook and Mags come to the bus. They too are attacked by the robot bus conductor, but the Doctor manages to get it to destroy itself. Ace finds one of Flowerchilds earrings in the sand outside and pins it to her jacket. Cook and Mags take off for the circus in their jeep, leaving the Doctor and Ace to continue walking.

On reaching at the Circus, Cook and Mags are invited through to the ring, where Bellboy is being punished. Mags screams, but her scream is muted by the Ringmaster (Ricco Ross) with an electronic device. Having just arrived outside, Ace hesitates as she thought that she heard screaming. The Doctor asks her if they are going in or not, and the Chief Clown appears at the entrance and waves them in. Inside, they meet Morgana (Deborah Manship), a gypsy mystic who explains that all the founder members of the Circus expressed themselves through special skills  hers was fortune telling. The Ringmaster invites the two travellers to take their seats. Morgana tries to warn them of something but the Chief Clown appears and ushers them through.

The Doctor and Ace sit next to a strange family: a mother (Janet Hargreaves), a father (David Ashford) and a little girl (Kathryn Ludlow). The show starts, and amid juggling and tumbling clowns (Patrick Ford, Paul Sadler, Phil Sadler, Alan Heap, Paul Miller, Dave Pumfrett, Jeff Davis, Karl Magee, John Alexander, Hugh Spight, Nicky Dewhurst, Earth G, Raymond Dunstan) the Ringmaster announces that the Doctor will be the next act. The Doctor leaves to prepare, and Ace runs off when the Chief Clown notices Flowerchilds earring on her jacket. The Doctor is put in a cage with Cook, Mags and Nord. Cook insists that Nord be the next to enter the ring, and the Vandal is taken away by clowns.

Nord enters the ring and lifts a weight  a feat for which he receives a marking of three 9s from the family. He is then asked to tell a joke but finds this more difficult and receives three 0s. He is reduced to ashes by a bolt of lightning.

Another participant arrives. This is a boy (Gian Sammarco) who is a big fan both of the circus and of Cook. The Doctor and Mags manage to escape from their cell. Ace however is captured by the Chief Clown and put in a darkened workshop full of partially constructed robots, which start to move. She is rescued by Bellboy, who switches off the robots.

The Doctor and Mags find their way to a stone tunnel leading to a well. The well seems bottomless, but when the Doctor drops a juggling club down it there appears at the bottom an eye symbol of a design previously seen displayed on the kites. Suddenly Cook appears, flanked by clowns. He has come to collect them all as they are due to appear in the ring. As they leave they pass under an image of a moon, which induces a strange reaction in Mags. The Doctor takes this opportunity to escape again. He returns to the circus entrance, where he sees in Morganas crystal ball an image of the same eye symbol. He is concerned that things are getting out of control quicker than he expected.

Bellboy explains to Ace that his circus skill was making robots. He gives her a control box for the large robot buried in the sand.

The Doctor meets Deadbeat (Chris Jury), a mentally damaged man who appears to be a cleaner at the Circus, and is taken by him to Ace and Bellboy. Bellboy remembers that Deadbeat used to be called Kingpin. Both men haltingly recall events that brought the Psychic Circus to its present situation, and the Doctor starts to piece the mystery together.

Meanwhile, Cook has graciously allowed the young fan to go before him into the ring. The boy is killed.

The Doctor, Ace and Deadbeat head off to the well. The Chief Clown arrives at the workshop and Bellboy commits suicide by causing his robot clowns to kill him.

Deadbeat shows the Doctor and Ace how he summoned the powers that now control the Circus by lifting an amulet above the well. They realise that the centre of the amulet  the eye  is now missing and must be hidden at the bus. The Doctor asks Ace to go to the bus and fetch it. He then returns to the cage and proposes to Cook and Mags that they all enter the ring together.

The Ringmaster introduces the three newcomers to the ring. Cook asks to have a moon spotlight directed at Mags. She turns into a werewolf and chases the Doctor around the ring. Cook hopes to deal with the powers behind the Circus once the Doctor is out of the way. The Doctor confronts the family, all of whose eyes glow green. He then falls, but Mags turns on the Captain and kills him.

Ace locates the box in the bus and takes it outside to Deadbeat, where she finds that she cannot open it. She is attacked by the bus conductor robot, which has been repaired and returned to the bus, and inadvertently stamps on the box as they struggle. The box opens and Deadbeat retrieves the centre of his amulet from within and inserts it in place. His full mental faculties return and he tells Ace to hit a button on the top of the conductors head. She does so and the robot explodes. Deadbeat  now Kingpin once more  realises he must get the amulet to the Doctor.

Mags reverts to her human state and she and the Doctor run from the ring. The family demand another act and, as there is no-one left, kill the Ringmaster and Morgana instead.

The Doctor tells Mags to meet up with Ace and Kingpin. As she leaves, however, she is followed by the Chief Clown in the hearse. The Doctor asks the eye in the crystal ball to open a pathway for him. He then pushes through the barriers and emerges into a different circus ring before three stone gods (David Ashford, Janet Hargreaves, Lorne McCulloch; voices: David Ashford, Janet Hargreaves, Alan Wearing). He is in the space-time of the Gods of Ragnarok, beings he has fought through all time.

The hearses progress is obstructed by the stallslady, whose stall is blocking the road. The Chief Clown and the robot clowns continue their pursuit on foot. Mags meets up with Ace and Kingpin. Ace leads them to the buried robot and, using the control unit given to her by Bellboy, destroys the robot clowns. The Chief Clown is also killed. The three friends then use the hearse to return to the circus.

The Doctor is performing a succession of conjuring tricks to keep the Gods amused.

Ace, Mags and Kingpin find that the Psychic Circus ring is deserted. Kingpin realises that the Doctor is in the dark circus and heads for the well. Behind them Cook comes back to life. He follows them and takes the amulet from Kingpin. The Doctor finishes his act just as Ace makes Cook drop the amulet down the well. The amulet appears before the Doctor and he uses it to deflect blasts of power from the Gods. The dark circus starts to tremble and fall apart. The Doctor throws the amulet at the Gods and walks from the circus tent as it is completely destroyed behind him.

The Doctor suggests that Mags help Kingpin to rebuild the Circus. Kingpin invites the Doctor and Ace to join them as well, but the Doctor declines.

The Greatest Show in the Galaxy (Part 3)
Not Availa 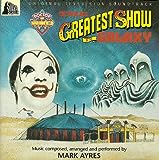 Ayres: Doctor Who - The Greatest Show in the Galaxy [SOUNDTRACK]
£61.45