While Turlough and Tegan occupy themselves playing chess, the Doctor tries to discover the cause of a power drain that is affecting the TARDIS. He realises that someone is trying to contact them and increases the power. The White Guardian (Cyril Luckham) appears and tells him that the balance of power is at risk and that there is extreme danger. He then fades away once more. The Doctor keeps the power up, causing smoke to pour from the console, and the Guardian reappears just long enough to deliver some co-ordinates  galactic north six degrees, 9-0-7-7  and instruct him to go to the indicated location immediately. The Black Guardian (Valentine Dyall) then appears and gloats that the Doctor cannot succeed and will soon be dead.

After the two Guardians have vanished, the TARDIS materialises. The Doctor surmises that the time override locking must have been in the co-ordinates. The Doctor and Turlough check outside, leaving Tegan behind in case the White Guardian tries to make contact again. They seem to have arrived on a ship, and they make their way to the crew room. There, the crew, including Jackson (Tony Caunter) and Collier (Clive Kneller), accept them as new arrivals  doctor is the slang name for the ships cook. They discover that they are on an Edwardian sailing ship called SS Shadow, which is taking part in a race. Curiously, however, none of the crew can remember joining the ship.

Meanwhile the White Guardian has delivered another message to Tegan: winner takes all. She sees the face of a man looking in through the TARDISs scanner and leaves the ship when he appears to fall. The stranger, who seems to be able to move from one place to another instantaneously, seizes her and takes her to meet her friends.

The Doctor is reunited with Tegan in the dining room and she delivers the Guardians message. Captain Striker (Keith Barron) then enters. His first mate, Marriner (Christopher Brown), is the stranger who escorted Tegan. The whole party sit down to dinner but Tegan falls seasick and Marriner offers to lead her to a cabin. The Captain orders the rum rations broken out, and the crew prepare to go aloft. Tegan, on the way to her cabin, sees some modern wet-suits and realises that all is not as it seems. The Doctor, Tegan and Turlough discover that they are indeed on a sailing ship  but it is in deep space, floating alongside several others.

The ships are racing around the solar system using the planets as marker buoys. As SS Shadow approaches Venus, the Doctor sees on the scanner an image of Critas the Greek (Byron Sotiris), the captain of one of the other ships, and notes that the only thing out of place is the Greeks jewelled ring  it is from 17th-century Spain. Striker explains that the ships crews are collected from different time zones. Reading the Doctors mind, he discovers that he is a Time Lord. This fails to impress him, however, as he himself functions in eternity. The Greeks ship is destroyed as the race takes it close to Venus, but Turlough is suspicious. The only other ship nearby was The Buccaneer. Striker reveals that the ships officers are all Eternals and that they need the minds of Ephemerals  as he terms all living beings  to exist.

Once alone, Turlough tries to contact the Black Guardian. The Guardian appears and throttles him, warning that he will never leave the ship. The Doctor goes to talk to Tegan, who is much recovered due to a remedial drink proffered by Marriner. Striker listens in on their conversation using his telepathic abilities, and is intrigued to hear of the TARDIS. When the Doctor and Tegan subsequently try to return to the ship, they find it has vanished.

The Doctor, Tegan and Turlough all get suited up and go aloft with Marriner. Turlough, who keeps hearing the Black Guardians threats ringing in his ears, throws himself overboard. He is picked up in a net by The Buccaneer. There he meets Captain Wrack (Lynda Baron), who orders that a sword with a jewelled handle be sent to Captain Davy and that invitations be sent to Striker for a social function. When she turns her attentions to Turlough, he claims that he wishes to serve her. The race passes through an asteroid storm and Wrack enters an ion room on the lower deck of her ship, leaving Turlough outside. Davys vessel explodes, apparently hit by an asteroid.

The Doctor, Tegan and Marriner arrive on board The Buccaneer to attend a party in its stateroom. The Doctor, following directions given to him by Marriner, sneaks off to find Turlough. The boy has been trapped in the ion room by one of the crew members, and the Black Guardian has again appeared to taunt him. Wrack meanwhile takes Tegan into a private room and freezes her in time. She places a new jewel in her tiara before unfreezing her and returning to the party. The Doctor and Turlough are captured by Wracks number two, Mansell (Leee John), when they leave the ion room. Turlough remains on board The Buccaneer, but Wrack sends all the others back to SS Shadow.

The two ships are now approaching the Enlighteners  represented by a giant crystalline structure in space  and the race is nearly over. The Buccaneer comes level with SS Shadow and the Doctor realises that it is about to launch an attack. As with the Greeks ring and Davys sword, a crystal must have been brought on board to act as a point of focus. Tegan remembers her tiara and the Doctor smashes the new crystal with a fire axe. This just multiplies its power, however, so he then hurls the shards overboard just before they can explode. The explosion has been brought about by Wrack, who has used the ion chamber to summon the Black Guardians powers and focus them on the crystal.

The Doctor persuades Striker to release the TARDIS, which has been hidden in his own mind, and then uses it to travel to The Buccaneer, which has taken the lead in the race. Tegan watches from SS Shadow as two humanoid forms fall from Wracks ship. It seems that the Doctor and Turlough have failed.

On each of the ships, the human crew members fade from sight. The Black and White Guardians then appear in The Buccaneers state room and place a glowing artefact on the table. They are joined there by the Doctor and Turlough: it was they who brought the ship in to dock, while Wrack and Mansell were ejected from the ion chamber. The Doctor turns down the prize of Enlightenment, however, saying that none should have it. The White Guardian agrees, and returns the Eternals to the void. The White Guardian then offers a portion of Enlightenment to Turlough. The Black Guardian reminds the boy of his agreement and demands that he give the Doctor over to him in exchange for a huge diamond within the glowing artefact. Turlough makes his choice: he sweeps the crystal from the table to the Black Guardian, who vanishes in flames. The boy is now free, as Enlightenment was not in fact the crystal but the choice. Even so, the White Guardian cautions continued vigilance; while he still exists, so too does his Black counterpart, until they are no longer needed.

Tegan wants to get away from this place, and Turlough asks if they can go to his home planet. The Doctor agrees. 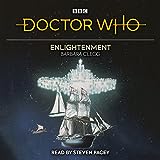