In a converted Georgian mansion known as Brittanicus Base senior control technician Miss Jan Garrett (Wendy Gifford) and her staff struggle to control an Ioniser which they are using to slow the progress of glaciers rolling over Britain. Leader Clent (Peter Barkworth) is convinced that they will be able to avert the approaching crisis but the whole group knows that they are a few short hours away from being forced to abandon the base.

Some of the Base's staff are already being evacuated and Clent orders that Scientist Arden (George Waring) be recalled from a mission at the glacier face. Arden has discovered a creature buried in the ice and ignores Clent's orders so that he can continue excavating the entombed figure.

The TARDIS arrives next to a giant dome and, entering through an airlock, the Doctor, Jamie and Victoria find themselves in the base. The Doctor realises that something is wrong and barges into the Ioniser control room. Despite Clent's protests, he helps Garrett regain full control of the Ioniser.

Arden and his team remove a massive humanoid figure from the ice, which Walters (Malcolm Taylor) names an Ice Warrior. Watching them are two ragged figures, Elric Penley (Peter Sallis) and Storr (Angus Lennie). As Arden's group prepare to leave with the frozen Warrior an avalanche sweeps Arden's second assistant Davis (Peter Diamond) into a chasm. Storr's arm is injured and Penley helps his friend to safety. Arden arrives back at the base with his discovery which is placed in a storage area with a power pack set to melt the ice around it. The Doctor examines what he can see of the creature and, concerned by the design of its helmet, goes to warn Clent. Jamie and Victoria fail to notice the Warrior beginning to move. The revived Warrior (Bernard Bresslaw) knocks Jamie out and kidnaps Victoria.

The Doctor tells Clent and Garrett that the being in the ice is an alien from an advanced culture. The Doctor surmises that the alien's spaceship must be buried in the ice and that if the Ioniser hits the ship's reactor it could cause a massive explosion. Clent is dubious but at that moment Jamie stumbles in and tells them what has happened.

In another part of the house, the Warrior, Varga, informs Victoria that he is from Mars. He discovers that he has been entombed in the ice since the first ice age and determines to return to his ship to revive his crew and then either to return to Mars or to conquer Earth.

On the computer's recommendation Clent decides not to follow the Doctor's advice about shutting down the Ioniser. Instead he sends Arden, accompanied by Jamie, to search for the Warrior's space craft.

Penley returns to the Base to gather medical supplies to treat Storr's injury. There, he overhears Varga order Victoria to take him to where he can find more power packs like the one used to revive him. Victoria has little choice but to agree.

Varga takes one of the power packs and tells Victoria that she will accompany him on his journey to find his ship. Clent enters the storeroom and is knocked unconscious by Varga. Penley helps the injured Clent and is soon joined by the Doctor. The Doctor tries to persuade the ex-scientist that his expertise could help push back the advancing glacier, but Penley refuses to help. He does, however, tell the Doctor about the Warrior and Victoria and offers to help track them. The Doctor declines his help. Penley leaves with the medicines he came to fetch.

At the glacier face Varga begins cutting through the ice with a sonic gun. He quickly frees four other Warriors; Zondal (Roger Jones), Turoc (Sonny Caldinez), Rintan (Tony Harwood) and Isbur (Michael Attwell), and restores them to life using the power pack. Zondal locates the Warriors' ship and Varga commands them to release it and create a cave to be used as a trap with Victoria as the bait.

Miss Garrett visits Penley's hut and tries to convince him to return to the Base but he again refuses. She attempts to pull a tranquilliser gun on him before Storr disarms her. Penley tells her to return to the base and look at his notes concerning the omega factor. She returns and gives Penley's notebook to the Doctor. The Doctor recommends to Clent that they put Penley's theories into practice immediately but Clent insists on computer simulations first.

Jamie and Arden reach the glacier and find a large cave cut into the ice. The Warriors appear and fire at the two men, who collapse. Varga orders Zondal to make repairs to the ship's propulsion unit.

When the Warriors have gone, Penley sneaks into the cave and, finding that Jamie is still alive, carries him away. The Doctor is worried when there is no further contact from Jamie and Arden and decides to go and search for them.

Victoria manages to get into the cave unnoticed and finds that Jamie's body has gone. She picks up Arden's communicator and contacts the base. Unaware that the signal is being monitored by the Warriors, Clent demands that Victoria describe the ship's propulsion unit. Varga sends Turoc to bring Victoria back to the ship as he wonders why the humans are interested in its engines.

The Doctor tells Victoria to try to reach the base but she is forced to run deeper into the ice caves when Turoc appears. The Doctor quickly prepares for his journey to the cave taking with him a phial of ammonium sulphide which he believes may prove toxic to the aliens.

Victoria flees through the caves. Just as Turoc grabs her wrist the roof of the tunnel above them collapses, trapping her in the dead Martian's claw.

Having used the last of their drugs, Storr decides to go to the Warriors for help despite Penley's warnings. When Storr reaches the main cave he hears Victoria calling for help.

Whilst searching for Storr, Penley meets the Doctor and takes him to Jamie. Storr frees Victoria but takes her back to the Warriors. Varga questions Storr about the humans' Ioniser but Storr knows nothing. Declaring the man useless, he is killed. They then begin to question Victoria.

Penley takes Jamie to Brittanicus Base whilst the Doctor checks on Victoria and the Warriors. The Doctor gains entry to the Martian ship by telling Varga that he is a scientist. He explains the danger if the Ioniser should hit the space craft's engines but Varga believes him to be a spy and the Ioniser to be a military weapon.

Clent receives orders from the World Ioniser Base who have analysed Penley's figures and have decided to make a world-wide attempt to push back the ice in six hours' time. Garrett is worried that they still have insufficient information about what will happen to the alien ship's engine and the computer advises Clent to wait. Garrett tells Clent that the computer will wait forever as it will not gamble or take a risk if there is a chance it will be destroyed.

Penley and Jamie arrive at the Base. Penley is disgusted that Clent still refuses to take decisions for himself and the two men end up fighting. Clent orders Walters to tranquillise Jamie and Penley.

Varga has travelled to the base with Isbur and Rintan. He contacts Zondal and tells him to aim the ship's sonic cannon at the Base but to hold fire while Varga contacts the scientists. In the ship the Doctor surreptitiously hands Victoria a phial of ammonium sulphate. They throw the chemical at Zondal's face but as the creature collapses, it manages to fire the cannon.

Brittanicus Base is rocked by the blast and immediately Varga orders the humans to surrender. Clent agrees to meet Varga to discuss their mutual needs.

In the ship Zondal lies unconscious. The Doctor realises that Varga is helpless without the cannon and so begins to modify it to use against the aliens.

Varga and his troops arrive in the control room where they kill Walters. Varga demands mercury isotopes for his ship's reactors but Clent says they have none. Varga then announces that they will remove the base's fuel elements and disable the Ioniser.

In the storage area, Penley realises that the Martians are not concerned by the advancing glaciers as they thrive in extreme cold. He alters the temperature controls and as the heat increases the Warriors begin to weaken. Suddenly the Warriors are crippled by a blast from the altered sonic cannon. The Doctor contacts the base and tells Varga to withdraw or he will fire again. Realising that a second blast would be fatal Varga agrees. Before the Doctor and Victoria return to the base, they fuse the cannon leaving it useless.

Back at the Base, the Doctor tells Victoria to return with Jamie to the TARDIS while he helps Penley in the control room. Penley seizes control and pushes the Ioniser up to full power.

In their ship the Warriors make ready to take off using the last reserves of power. Varga believes they will be invincible once they are in the air. Heat begins to build up inside the Warriors' ship and Varga realises that the humans are using the Ioniser against him. The Warriors collapse seconds before the ship explodes.

Everyone at the base is relieved when their instruments show that the explosion was not as large as they had feared. Ionisation has worked and the glaciers are in retreat. Clent and Penley decide to forget their differences and work together. Miss Garrett notices that the Doctor has slipped away.

Doctor Who: The Ice Warriors, Episode 1
Not Availa 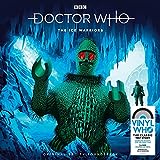