The Enemy of the World

The TARDIS lands on a beach near Cape Arid in Australia. There, the Doctor is spotted by three men in a hovercraft, Rod (Rhys McConnochie), Curly (Simon Cain) and Anton (Henry Stamper). They contact Astrid Ferrier (Mary Peach) by radio to tell her they have found 'him' and are closing in to attack. Astrid is unconvinced and when her boss Giles Kent (Bill Kerr) contacts her he orders her to stop the attack.

The Doctor and his friends come under fire from the hovercraft but are rescued by Astrid who arrives in a helicopter. She takes them to her bungalow in the Cedar district with the men in the hovercraft in hot pursuit.

Astrid explains that the Doctor was attacked because he bears an uncanny resemblance to a Mexican called Salamander who is plotting to become dictator of Earth. She asks the Doctor to help them discredit Salamander by impersonating him. At that moment the men from the hovercraft open fire on the house. In the gunplay that follows one of the men is shot and while the Doctor and his friends escape the others take the helicopter to hunt them down. However, the helicopter's fuel tank has been punctured by bullets and explodes.

The Doctor is taken to meet Kent who shows him a video of Salamander (Patrick Troughton) addressing the United Zones General Assembly. Kent tells the Doctor that the world praised Salamander as a hero as his Sun-Catcher satellite was intended to wipe out world famine, but Kent became suspicious that Salamander was merely using the Sun-Catcher to gain a position of power. Kent explains his fears were confirmed when he was sacked from his position as Deputy Security Leader of the North African and European Zones. Many others lost their posts, all being replaced with people loyal to Salamander.

Kent asks the Doctor to impersonate Salamander in order to obtain information that will implicate the dictator. Before the Doctor can reply, Salamander's Security Chief Donald Bruce (Colin Douglas) arrives. The Doctor hides in a side room while Bruce questions Astrid about the earlier events at her bungalow. The Doctor suddenly emerges, pretending to be Salamander, and Bruce is completely fooled.

When Bruce has gone, the group make further plans. Jamie and Victoria will travel with Astrid to the Central European Zone where they will infiltrate Salamander's inner circle of supporters with help from Controller Alexander Denes (George Pravda). The Doctor and Kent will travel to the Sun Conservation Establishment.

In Hungary, the real Salamander predicts that volcanoes will erupt in the previously stable Eperjes-Tokaj range. Denes is sceptical but all Salamander's other predictions of disasters have been correct. Salamander's plan is to discredit Denes and replace him with one of his own men, Fedorin (David Nettheim). The volcanoes explode as predicted and hundreds of people are killed. Denes is arrested by Bruce under the charge that he allowed people to die despite Salamander's warnings.

Jamie gains entry to Salamander's entourage by pretending to save the dictator's life during a faked bomb attack. He is employed as a security guard, and uses his new position to get Victoria a job in the kitchens, working for Griffin, the chef (Reg Lye).

Salamander wants Fedorin to poison Denes, but the Deputy-Controller cannot do it. Salamander therefore poisons Fedorin and claims he committed suicide.

Astrid enters the palace disguised as a messenger. She tells Jamie and Victoria to create a diversion at eleven o'clock that night so that she can attempt to rescue Denes. During the rescue attempt, Denes is killed and Jamie and Victoria are captured..

Astrid manages to escape and returns to Kent's office. Fariah (Carmen Munroe) - Salamander's food taster - follows her and hands her a file detailing Salamander's blackmailing of Fedorin. The Doctor and Kent return to the office which then comes under attack from a group lead by Benik (Milton Johns). The Doctor, Astrid and Kent escape but Fariah is killed and the file is taken by Benik.

Salamander arrives at his research plant and, entering a secret lift in the records room, descends to an underground shelter. There, a group of people lead by Swann (Christopher Burgess), believe that an atomic war has taken place five years earlier and that Salamander has been risking his life to bring them supplies and food. Salamander tells them that they must continue to cause the 'natural' disasters as a means of destroying the two evil factions who continue to fight on the surface.

Bruce arrives at Kent's trailer and discovers the Doctor preparing to impersonate Salamander. Sensing that Bruce is disaffected with the real Mexican the Doctor asks for his help to rescue Jamie and Victoria and to prove that Salamander is not the good man he pretends to be. Bruce reluctantly agrees to aid the Doctor.

The Doctor and Bruce arrive at the base in time to take charge of the interrogation of Jamie and Victoria. Before he reveals his true identity to his friends the Doctor convinces Bruce of Salamander's true nature by getting Victoria to show her hatred of the would-be dictator.

While Swann is unpacking the food brought by Salamander, he finds a piece of newspaper which is only one year old. Swann accuses Salamander of lying and so Salamander takes him to some natural underground tunnels where he leaves him for dead.

Astrid finds Swann amongst the rocks and bushes outside the research complex. Before he dies, he manages to tell her that his killer was Salamander. Astrid finds her way down to the shelter and tells the people that Salamander has deceived them and killed Swann.

Posing as Salamander, the Doctor manages to bluff his way into the records room while Bruce arranges for the release of Jamie and Victoria. Kent also arrives as does Astrid with two of the people from the shelter, Colin Redmayne (Adam Verney) and Mary Smith (Margaret Hickey). They recognise Kent as Salamander's partner who helped trick them into going into the shelter. Kent's true motives are thus revealed. He wants to take control of the world himself. Kent escapes into the tunnels where a self-destruct mechanism is located.

The Doctor and the others escape just before Kent sets off the device. Kent meets Salamander in the tunnels and the Mexican shoots him dead. Bruce sets about rescuing the other people from the shelter.

Jamie and Victoria wait in the TARDIS for the Doctor who arrives and silently indicates for them to take-off. Jamie is suspicious and then the real Doctor arrives. Before they can tackle Salamander he activates the TARDIS' controls sending it spinning out of control with its doors still open. Salamander is sucked out of the ship whilst Jamie, Victoria and the Doctor are left holding on for their lives. 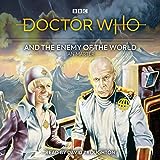 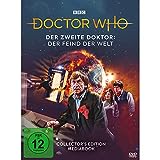