The TARDIS arrives on a runway at Gatwick Airport and the travellers are forced to split up to avoid arrest by a policeman (James Appleby). Polly hides in the Chameleon Tours hangar where she witnesses the murder of a man (Peter Whitaker) by one of the company's employees, Spencer (Victor Winding), using a ray gun. Ben meanwhile watches as the TARDIS is moved to hangar four. Polly finds the Doctor and Jamie and tells them what she has seen. The Doctor examines the body and discovers that the man was killed by an alien weapon. He sets off to warn the authorities. Unknown to the travellers, Polly's presence in the hangar was detected by Spencer, whose superior Captain Blade (Donald Pickering) orders him to kidnap her as she can identify him. The man Polly saw killed was Inspector Gascoigne. Inside a secret control room within the hangar Spencer tells Blade that Gascoigne had discovered 'the postcards' and had to be killed. The man's body is disposed of and Spencer succeeds in kidnapping Polly, who is sent for processing.

The Doctor and Jamie are held by immigration officials as they have no passports. They manage to persuade the Commandant (Colin Gordon) to investigate their claims but by the time they arrive at CT's hanger the body is gone. Back at immigration control they spot Polly amongst some passengers disembarking from a flight, but she claims not to know them and states that her name is Michelle Leuppi. The Doctor and Jamie slip away from the Commandant and the police and hide in the airport concourse. There they see Michelle working at the Chameleon Tours reception desk.

Spencer and Blade usher a strange featureless humanoid across the airport to the medical centre. There a nurse operates a machine which turns the alien into a duplicate of George Meadows (George Selway), the air traffic controller. The alien is given a black armband while the real Meadows is given a white one.

Ben catches up with the Doctor and Jamie. The Doctor suspects that Michelle knows about the murder. They overhear Blade telling Michelle that she must leave on the next CT flight. The Doctor sends Ben back to the hangar to search it while the he tries to warn the Commandant.

A young girl called Samantha Briggs (Pauline Collins) arrives at the CT desk searching for her brother Brian, who left for Rome on a CT flight some weeks earlier. She has received a postcard from him but the authorities in Rome can find no trace of him. Jamie overhears Samantha's story and introduces himself.

Detective Inspector Crossland (Bernard Kay) meets the Commandant to inform him that he is investigating the disappearances of Brian Briggs and Inspector Gascoigne. The Doctor enters air traffic control but the Commandant orders his arrest and he is forced to flee.

Ben searches the CT hangar and finds Polly in a trance-like state inside a large packing crate. He tries to use the office phone to call the Commandant. The Doctor is investigating the office behind the CT reception desk. He sees Ben on a monitor screen being attacked and rushes over to the hangar, where he finds George Meadows' motionless body in a packing crate. A strange voice lures the Doctor into the secret control room and the door closes, trapping him inside as it fills with gas. The Doctor manages to block the gas inlet, and when Spencer returns to the office he jumps him and takes the man's weapon. He then returns to the main concourse and finds Jamie, Samantha and Crossland. While the Doctor and Crossland go together to see the Commandant, Jamie and Samantha search the CT hangar. They find a pile of postcards written by young former CT passengers, which are ready to be sent abroad for posting back to their parents.

The Doctor demonstrates the freezing effect of Spencer's weapon for the Commandant, who grants him twelve hours to investigate events. A recovered Spencer meanwhile orders the fake Meadows to plant on the Doctor a small device which will enable him to be killed.

Crossland boards the CT plane to quiz Blade about the disappearances. Once there however he is taken prisoner by Blade and the stewardess Ann Davidson (Gilly Fraser) and discovers that the plane is really a disguised spaceship. He sees that the passengers that boarded earlier have now all vanished.

The Doctor and Jamie discover the secret control room in the CT hangar. Spencer operates the device Meadows has planted on the Doctor and he collapses. Jamie quickly removes the devise from the Doctor. Spencer enters the hangar and after a short struggle both Jamie and Samantha are frozen by the alien gun. When they recover they find the Doctor also regaining consciousness. They are all tied up and a laser beam is set to cut through them. They use a small mirror from Samantha's purse to deflect the beam and escape their bonds.

The Commandant's secretary Jean Rock (Wanda Ventham) reports that no CT aircraft has ever arrived at its scheduled destination. The Commandant arranges for an RAF fighter to follow the next CT flight to see where it goes.

The Doctor and Jamie try to enter the medical centre but are obstructed by the officious Nurse Pinto (Madalena Nicol). They enlist the help of Jean, who pretends to faint in order to lure the nurse out of the medical centre. The Doctor then sneaks in and discovers the real nurse in trance. Before he leaves he picks up some of the duplicates' armbands.

Samantha buys a ticket for the next CT flight to Rome, still hoping to find her brother. Jamie is worried that she is putting herself in danger. He steals the ticket from her and boards the plane in her place. Samantha is lured into the office at the CT kiosk and kidnapped by Spencer. The plane takes off and Jamie begins to feel sick. He spends the flight in the toilet and is absent when the other passengers suddenly vanish.

The air traffic control centre at Gatwick tracks the latest CT flight, which is being tailed by an RAF fighter. Aboard the CT plane Blade spots the fighter and destroys it. The plane suddenly vanishes from Gatwick's radar screens. The Doctor realises that is heading up into space.

The plane's wings retract and it takes on the shape of a rocket before docking with a space station above the Earth. Jamie explores the station until he discovers a room filled with the miniaturised bodies of all the missing passengers. The young Scot is spotted by Davidson and two of the faceless humanoid creatures and is taken before one of their leaders, who has adopted the appearance of Crossland.

The Doctor has the Commandant arrest the fake Meadows. By threatening to remove his black armband, he extracts from the man an admission that he is a member of a race who have become known as Chameleons. The Chameleons have lost their individual identities after an explosion on their home planet. They are dying, but their scientists have discovered a means of stealing the identities of others. To that end CT tours was set up as a front for the kidnapping of fifty thousand young men and women, who are now held in the space station one hundred and fifty miles above the Earth.

The Doctor uses Meadows' duplicate to gain entry to the medical centre, where the fake nurse Pinto is holding Samantha. A struggle ensues between the fake Pinto and Meadows, during which the real Pinto's armband is ripped off. The alien disintegrates and the real Pinto quickly regains consciousness.

Blade returns to Gatwick in the CT plane and begins to gather all the Chameleon duplicates for transportation to the space station. The Doctor and Pinto don armbands and pretend to be Chameleons, while the Commandant and his men search the airport for the inanimate bodies of the missing staff that the aliens have replaced. The Doctor and Pinto are taken to the space station but Blade has discovered their subterfuge and captures them. The Doctor is taken before the fake Crossland and another of the Chameleons' leaders who has taken the form of Jamie. The Doctor warns them that the Commandant has found the missing airport staff and will shortly remove their armbands, thus killing the Chameleons who have taken on their forms. The aliens contact the Commandant who also tries to convince them that he has found the missing staff. The Chameleon leaders realise that this is a bluff, however, and decide that the Doctor and Pinto should be processed.

Back at the CT kiosk Jean and Samantha discover a list of twenty five car registrations and deduce that the aliens have hidden the missing staff in the boots of cars in the car park. They remove the armband from one man and his counterpart on the space station disintegrates. The Commandant warns the aliens that he is ready to remove Blade's armband next. The fake Blade guns down the fake Crossland and Jamie when they refuse to co-operate and takes command. He agrees to return all the missing humans as long as his people are allowed to revert to their faceless forms. The Doctor promises to help the Chameleons' scientists with their research into a permanent cure for their condition.

The Doctor is reunited with his companions and they return to Earth. Ben and Polly realise that this is the same day on which they began their travels with the Doctor incarnation and decide to remain in their own time. The Doctor and Jamie head back to the TARDIS and can only watch as it is driven off on the back of a van. 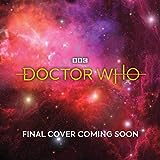 Doctor Who: The Faceless Ones: 2nd Doctor Novelisation
£20.00 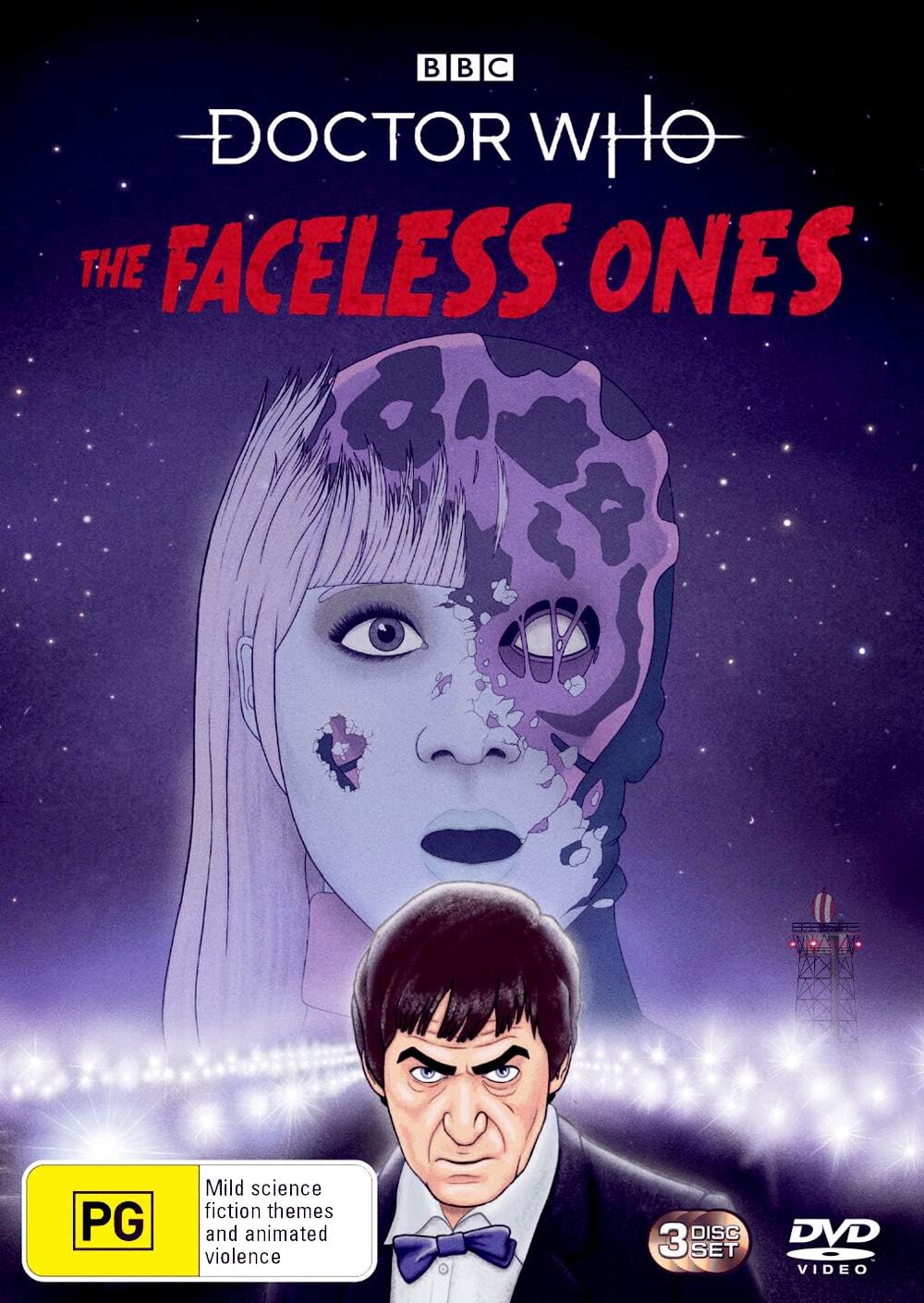