The TARDIS lands in the Wild West town of Tombstone in 1881. The Doctor, suffering from toothache, seeks out the local dentist, who turns out to be none other than the notorious Doc Holliday (Anthony Jacobs), currently engaged in a feud with Pa Clanton (Reed de Rouen) and his sons Ike (William Hurndell), Phineas (Maurice Good) and Billy (David Cole). Lawmen Wyatt Earp (John Alderson) and Bat Masterson (Richard Beale) are meanwhile doing their best to keep the peace.

For once, the Doctor is unable to help and, in the climactic shoot-out, the young Clanton brothers and their gunman ally Johnny Ringo (Laurence Payne) are all killed by Holliday, Earp and Earp's brother Virgil (Victor Carin). 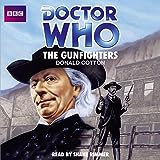 The Gunfighters (Doctor Who)
Not Availa

Doctor Who: The Gunfighters
Not Availa