The TARDIS reforms itself and arrives in space on the dark side of the Moon. The Doctor has to relocate the ship quickly to avoid a missile attack from the lunar surface. They finally land in a field on Earth in the late twentieth-century, but the TARDIS's exterior has become invisible due to a damaged visual stabiliser circuit. The Doctor, Jamie and Zoe set off to contact Professor Travers and get his help to repair the faulty circuit.

When they arrive at Travers' home the travellers find that the Professor is away in America and his house is being rented by ex-model and photographer Isobel Watkins (Sally Faulkner) and her scientist uncle Professor Watkins (Edward Burnham). Isobel tells the Doctor that she is worried about her uncle who has disappeared after working on a new invention for the world's biggest electronics company International Electromatics. The Doctor and Jamie investigate Watkins' disappearance by going to the IE's London head office.

A computerised receptionist won't allow them access, but when they try an alternative route into the building they are gassed and taken by the company's security chief, Packer (Peter Halliday), to see Tobias Vaughn (Kevin Stoney), the Managing Director. Vaughn apologises for their rough treatment and puts on a show of being helpful. He explains that Watkins is so engrossed with a delicate stage of his work that he is staying with them on site.

The Doctor is suspicious and rightly so. After he and Jamie leave, Vaughn opens a secret panel in the wall to reveal an alien machine. It tells Vaughn that the Doctor and Jamie have been recognised from Planet 14 as dangerous to their invasion plans.

The Doctor and Jamie are abducted by two men, Benton (John Levene) and Tracy (Geoffrey Cheshire) who take them to a transporter plane at an airfield. Inside they discover an operations room headed by Lethbridge-Stewart (Nicholas Courtney), now promoted to Brigadier. He is leading an organisation called the United Nations Intelligence Taskforce (UNIT) and they are currently investigating IE.

Zoe and Isobel are concerned when the Doctor and Jamie fail to return and follow them to IE in search of their friends. Zoe destroys the reception computer following which, the girls are taken prisoner and Isobel is used to make her uncle - who is being held captive - co-operate.

The Doctor and Jamie return to the house and find a note on the wall from Zoe and Isobel. They return to the IE offices and see several large packing cases being loaded onto a train, one of which has an item of Zoe's clothing showing. Before they have time to investigate further they are captured by Packer and his men.

The Doctor accuses Vaughn of kidnapping Zoe and Isobel but the industrialist denies it and invites the Doctor and Jamie to travel to the company's compound in the country and see the train arriving. At the compound the Doctor meets Watkins who has been warned not to mention the whereabouts of his niece or Zoe. Watkins shows the Doctor the teaching machine he has been developing called the cerebration mentor which induces emotional changes. The Doctor confronts Vaughn about the deep space communications system he has noticed at the compound whilst Vaughn demands that the Doctor explain the function of the damaged visual stabiliser circuit from the TARDIS. He threatens to give Zoe to Packer if the Doctor doesn't cooperate.

The Doctor and Jamie manage to escape onto a railway siding. Whilst hiding inside crates on the trains, Jamie has a close encounter with a cocooned shape that begins to move.

The Doctor and Jamie emerge from their hiding places and overhear guards being ordered to take Zoe and Isobel to the tenth floor. Vaughn tells Packer that he intends to use the cerebration mentor to control the Cybermen once they have invaded. Vaughn also plans to capture the TARDIS in case his plans fail.

Vaughn broadcasts over the intercom system, telling the Doctor that he has ten minutes to surrender or else Zoe will be harmed. The Doctor calls in help from UNIT over a radio transmitter and a helicopter arrives to rescue Zoe and Isobel through the window of the room they are locked in.

Vaughn realises that UNIT is becoming dangerous to him and exercises hypnotic control over Major General Rutlidge (Edward Dentith) and orders him stop UNIT's investigations. The Doctor examines pictures which show UFOs in the skies over the IE factory. He reasons that the spaceships are bringing the cocoons to Earth. Sneaking into the London IE warehouse he and Jamie see a Cyberman breaking out of a cocoon.

Jamie and the Doctor warn the Brigadier about the Cybermen and surmise that an army of the creatures must be hidden on Earth. The Brigadier has been ordered to cease investigations by Rutlidge but plans to go to Geneva for higher authority but to do this he needs concrete proof. Isobel offers to use her skills as a photographer to get proof but the Brigadier refuses to let her. The Doctor hazards a guess that the Cybermen's army is being hidden in the sewers of London.

Vaughn tests Watkins' invention on an awakened Cyberman and the machine drives the alien mad. The creature stumbles off into the sewers. Vaughn reveals that in one hour's time all humans on Earth will be under the mental control of the Cybermen due to a micro-electronic circuit built into every piece of IE equipment. The Doctor examines an IE radio, realises its hidden function, and works on a device which will block the signal. In the meantime, Isobel. Jamie and Zoe have ventured into the sewers to find proof for the Brigadier. They narrowly escape from the Cybermen but Isobel's pictures prove to be of no use as they look too much like fakes.

Watkins delivers his perfected machine to Vaughn and discovers that Vaughn has been partially cybernised. While UNIT mount a successful raid to free Watkins, the Doctor creates a device called a neurister which will overcome the Cybermen's hypnotic signal when taped to the back of the neck. The Brigadier arranges for UNIT troops be issued with the devices.

At dawn, the Cyber signal is broadcast and Earth's population collapses. The Cybermen leave the sewers to take over London.

UNIT plan to use a Russian rocket to destroy the source of the Cybermen's hypnotic signal, whilst missiles launched from the UK will be used to wipe out the rest of the Cybermen's fleet which is homing in on Vaughn's transmitter. The Brigadier sends Captain Turner (Robert Sidaway) to Russia to organise the rocket while he and the UNIT plane fly to the missile site at Henlow Downs. The Doctor decides to make one last attempt to dissuade Vaughn.

With help from Zoe, the missiles from Henlow Downs successfully destroy the cyber ships and the Cybermen blame Vaughn for the setback. They announce that they will kill all life on Earth with a megatron bomb. Furious at the Cybermen's actions Vaughn uses the cerebration mentor to destroy the alien device in his office.

The Doctor persuades Vaughn that his only hope now is to aid humanity to foil the Cybermen's plan. The Doctor and Vaughn take a helicopter to the factory where they use Watkins' machine to battle the Cybermen massed there. UNIT troops arrive to aid them. Vaughn is killed but the UNIT forces succeed in shutting down the homing signal.

Another missile destroys the megatron bomb en-route to Earth and the Russian rocket destroys the last spaceship and the hypnotic signal is stopped.

With the crisis over, the Doctor, Jamie and Zoe return to the TARDIS where the Doctor installs the now repaired circuits, turning the ship visible again. 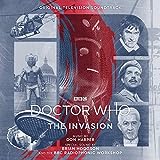