Abu Gond (Terence Brown) and Vana Gond (Madeleine Mills) have been selected as the brightest of their generation and like generations of Gonds before them they are made ready to enter the machine of the Krotons to serve the Gond's masters.

Thara (Gilbert Wynne) is upset by Vana's selection as once the companions of the Krotons enter the machine they never leave. He tries to stop her entering the machine but is held back and Vana voluntarily heads for the entrance.

The TARDIS has landed in a desolate part of the planet and the friends spot the Gond city below them in the distance. Jamie finds a metal door in the rock face which opens to reveal Abu. Nozzles on either side of the doorway spray a smoke at the man and he is vaporised.

The Doctor, Jamie and Zoe rush to the Gond city and enter the hall just as Vana enters the machine. They are prevented from following by the guards but after Vana has gone the Gond council leader Selris (James Copeland) comes to see the newcomers. He disbelieves them when they tell him that they have seen a man vaporised and when he finds they have come from the area the Gonds call the wasteland he tells them that they will die from the poison there.

Thara is Selris' son and when he hears their story he travels with them to try to save Vana. They arrive back at the door and the Doctor jams the nozzles with rock. Vara emerges and the Doctor grabs her. They take the catatonic girl to Selris' home to recover.

Selris explains that thousand of years ago the Krotons descended on the planet from the sky. The Gonds tried to fight but the Krotons released a poison which created the Wasteland and killed many Gonds. Since that day the Gonds have lived by the Krotons' laws with each child taught by the Kroton's learning machines. The Gonds had seen the Krotons as friends up to now, but the Doctor points out they have created a self-perpetuating slavery.

Thara, along with a group of other Gonds, tries to get the Krotons to leave their machine by attacking the learning machines. The Doctor and Selris arrive to stop the Gonds, but a voice warns them to leave the hall. A snake-like tentacle emerges and attacks the Doctor.

Back at Selris' home Vana is resting. The Doctor decides that he and Zoe should investigate the gaps in the Gonds' knowledge and they return to the hall.

While the Doctor and Selris examine the underground posts that support the machine, Zoe uses one of the learning machines and passes a test. To her horror, Zoe is selected to join the Krotons. Selris tells the Doctor that Zoe must comply so the Doctor also takes the test. They go into the ship just as Jamie arrives too late to stop them.

Inside the Doctor and Zoe are drained of mental energy but quickly recover. They find a tank of liquid in which crystals are beginning to form. The crystals grow quickly and a bulky shape forms. The Doctor takes a sample of the liquid and then he and Zoe leave the ship by the exit into the Wasteland.

The reanimated Krotons (Miles Northover, Robert Grant) realise that the Doctor and Zoe are too clever to be Gonds. They need to recapture the 'high-brains' to help them power the Dynatrope - their ship. The Krotons monitor Jamie's attempts to break into the ship and allow him in. They force Jamie to tell them about the TARDIS and make plans to destroy it. They declare him to be a primitive and of no further use to them.

The Doctor takes the liquid sample back to the TARDIS where he finds that it is based on tellurium. He gathers some sulphur from the nearby rocks. A Kroton leaves the Dynatrope and is guided towards the TARDIS by its fellow Kroton aboard the ship.

The Gonds are preparing to attack the Krotons. Eelek (Philip Madoc) plots to seize control of the council from Selris by leading the uprising.

Jamie attacks the Kroton in the ship with one of its own guns allowing Zoe and the Doctor to avoid the Kroton outside. The Krotons try to destroy the TARDIS but the ship simply re-appears further up the mountain due to the fact that the Doctor remembered to set the HADS (Hostile Action Displacement System).

Selris persuades the Gonds to forgo a frontal assault on the Krotons and instead they try to remove one of the giant pillars which support the ship.

The Doctor learns of the plan from Thara and the now recovered Vana who have refused to leave the city with the other Gonds. They go to see Beta (James Cairncross), the Gonds' scientist, and the Doctor asks him to make some sulphuric acid. The Doctor and Zoe then head for the hall.

The Doctor is too late and the roof of the under hall collapses killing several Gonds and burying the Doctor. Thara rescues the Doctor but is injured himself. Zoe and the Doctor learn that Jamie is inside the Dynatrope and they head back to the Wasteland exit to find him. They discover the Scot trapped halfway under the door and help him out.

One of the Krotons orders the Gonds to bring the 'high brains' to them. It promises Eelek that they will leave the planet if they are given the two travellers. Eelek agrees.

The Doctor sends Jamie to Beta to help him make more acid while he and Zoe return to the hall. They are seized and forced back into the Dynatrope. Selris knows that he must get the acid to the Doctor and throws himself through the closing door. He is able to give the Doctor the container before he is killed by the Krotons.

The Krotons reveal that they need the Doctor and Zoe's mental abilities to replace their two crew members who 'ceased to exist' during the space battle that caused them to land on the Gond's planet. The Doctor keeps the aliens talking whilst Zoe pours the acid into the Krotons' liquid tank.

The creatures collapse and begin to dissolve. The Doctor notices that the ship is dissolving too and once outside they find that Jamie, Beta, Thara and Vana have been pouring acid onto the outside of the ship.

With the Krotons destroyed, the Doctor, Jamie and Zoe slip away, leaving the Gonds to find their own answers for the future. 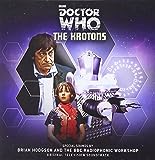 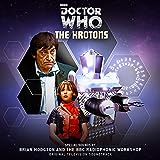 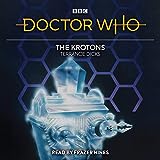