The Seeds of Death

In the 21st century T-Mat - a matter transmission system - has replaced all other forms of transport on Earth. The system is controlled from Earth but with a vital relay centre on the Moon. Gia Kelly (Louise Pajo) is the technical brains behind the operation.

The technician on the Moon, Fewsham (Terry Scully) has fallen behind on the scheduled transmats so Kelly orders Harry Osgood (Harry Towb) to the Moon to sort out the problem. No sooner does Osgood arrive than a siren warns that the outer airlocks to the base have been operated and the T-Mat relay station is invaded by a group of Martian Warriors led by a higher ranking Martian called Slaar (Alan Bennion).

Slaar orders Osgood to operate the T-Mat for them but he sabotages the machine and is killed for his trouble. Slaar then orders the cowardly Fewsham and the other two technicians Phipps (Christopher Coll) and Locke (Martin Cort) to repair the machine or die. They decide to repair the communications link and warn Earth.

On Earth Kelly and her boss Commander Radnor (Ronald Leigh-Hunt) are under immense pressure to get the system working again. They have no way of contacting the Moon or travelling there without the T-Mat system. Kelly tells Radnor that they need an old-style rocket and luckily Radnor knows where to find one.

The TARDIS lands in a space museum run by Daniel Eldred (Philip Ray). Radnor and Kelly arrive to try to persuade Eldred to give them the ion rocket he has secretly been preparing. A message is patched through for Radnor from the Moon. Locke tells the commander that Osgood is dead but the link is cut off before he can explain more. On the Moon the Warriors kill Locke but Phipps manages to escape and hides in the Solar Power room. Fewsham is ordered to repair the T-Mat link to the control centre on Earth.

Eldred is eventually persuaded to give Radnor the rocket after the Doctor, Jamie and Zoe volunteer to fly it. The rocket is launched and after a few problems, nears the Moon.

Fewsham succeeds in repairing the T-Mat link. Slaar orders the technician to set the machine to receive only. Noticing that T-Mat is now functioning, Kelly takes two technicians with her and travels to the Moon where she begins repairs whilst the Warriors watch from hiding.

Phipps uses equipment in the Solar Power room to create a radio and a heat projector which he uses to destroy one Warrior. He contacts the Doctor and they use his signal to guide them in. The Doctor and Jamie recognise Phipps' description of the alien invaders as being the Martian Warriors.

The Doctor leaves Zoe and Jamie to refuel the rocket whilst he rescues Phipps. Phipps tells him that they must destroy the T-Mat. Zoe is horrified when she hears the news because the rocket's motors are so badly damaged that it cannot return to Earth.

Kelly finishes her repairs and the Warriors emerge and kill her two technicians. The Doctor and Phipps manage to rescue Kelly but are forced to split up and the Doctor is captured.

Jamie and Zoe find the Solar Power room where they meet Kelly and Phipps. They decide to use the maintenance tunnels to reach the temperature controls and make the station uncomfortably hot for the Warriors.

Fewsham is ordered to use the repaired T-Mat system to transport Martian seed pods to Earth. Slaar who allows the Doctor to inspect the pods, one of which swells up and bursts in the Doctor's face causing him to collapse.

The pods are sent to cities around the world where they explode, the fumes they produce dispersing into the atmosphere. Slowly, a strange white fungus begins to spread around the world.

The Doctor has survived his experience with the pod and Slaar orders Fewsham to put the still unconscious Doctor into a T-Mat chamber and to transport him into space. The Doctor is rescued by Phipps and Jamie before Fewsham can activate the controls.

Slaar orders one of his Warriors to Earth, and when it arrives it heads for a weather control station. Inside it kills a technician and renders the weather control machinery inoperative.

Zoe manages to change the temperature and the creatures collapse. While the other Warriors including Slaar are on the Warrior's own ship, The Doctor, Jamie, Zoe, Kelly and Phipps return to Earth. Fewsham decides to remain on the Moon and appears to still be helping the Warriors when they return the temperature to normal.

Slaar announces that the Martian fleet is homing in on a signal that they are broadcasting from the Moon. Fewsham secretly switches on a view-screen so that everyone at the T-Mat control on Earth can see and hear Slaar's plans. Slaar discovers Fewsham's duplicity and has him killed.

The Doctor persuades Radnor to use an unmanned satellite launcher to put a satellite in space that will transmit a duplicate of the Martian homing signal. The Doctor also analyses the spreading foam and discovers it can be dispersed with water. He asks Jamie and Zoe to arrange for it to rain all over the Earth.

At the weather control station, the two friends find the equipment sabotaged and hide from the Warrior guarding the building. When the Doctor finds out that a Warrior was headed for the station, he follows. There, the Doctor creates a solar energy transmitter to destroy the creature. He then repairs the controls so that rain can be created.

With the satellite in space the Doctor returns to the Moon to put Slaar's own signal out of action. Whilst tampering with the device he is captured by Slaar. The Grand Marshal (Graham Leaman) of the Martian fleet contacts Slaar to tell him that they have followed the signal but are too close to the Sun. Contact is lost as the entire fleet is destroyed.

Slaar orders the Doctor to be killed but Jamie arrives via T-Mat at that moment and the Doctor uses the confusion to grab the Warrior's gun arm and point it at Slaar who is killed. The Doctor then electrocutes the remaining Warrior.

As rain falls across Earth, Kelly and Eldred argue about the future use of rockets and T-Mat. The Doctor, Zoe and Jamie slip away back to the TARDIS.

Doctor Who Revisitations 2 (The Seeds of Death / Carnival of Monsters / Resurrection of the Daleks)
£14.99

Doctor Who: The Seeds of Death [Region 2]
Not Availa 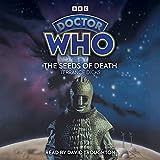 Doctor Who: The Seeds of Death: 2nd Doctor Novelisation
£20.00