A virulent disease that killed millions. A missing scientist. An ancient race of salvagers who collect and preserve the dead. The quarantined planet Antikon connects them all. 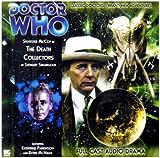